There is renewed talk about the ESV, which began, I am surmising, in the wake of some favourable posts about this translation a few weeks ago. CD-host took up the topic, and then Aberration blog, and now Polycarp and Onward, Forward, Toward.

This is from an article called “Evangelical Lap Dogs”, by R. C. Sproul, which appeared in the November 2002 issue of Tabletalk:

Actually, the TNIV appears to be a move not toward greater accuracy but away from it. One example: In the Sermon on the Mount, Jesus says, ‘Blessed are the peacemakers, for they shall be called sons of God.’ (Matt. 5:9). The TNIV changes sons to children. But the Greek word huios in its plural form means ’sons,’ not ‘children. ‘My Latin Bible translates it ’sons’ (filii). My German Bible, my Dutch Bible, and my French Bible translate it ’sons.’ Likewise, every English Bible I own translates it ’sons.’ Indeed, from the first century until today, the whole world has understood what the Greek says.

I am not sure if you know but the Tyndale, KJV, Luther and the Dutch Bible all say “children of God.” I think he is right about the Latin and French Bibles though. 2 out of 5 is not so bad, I guess.

That the KJV has always used "children of God" has particular significance for me, since this verse is represented in an enormous banner in the police headquarters of my city. That the KJV was gender neutral in this respect, is one feature which has made it possible to use Bible verses in public places. Not only that, but female police officers play an important role in combatting domestic violence.

It is disappointing to me that those who support the ESV and denigrate the TNIV, are basing their criticism on a false memory of the Tyndale, KJV and the Luther Bible. 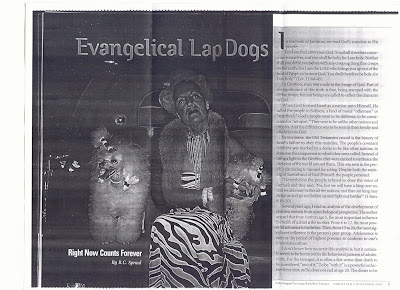 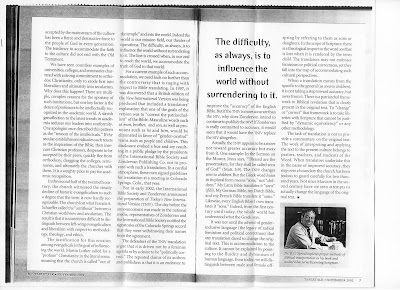 Posted by Suzanne McCarthy at 3:38 PM

To be fair, though, Sproul may only own the ESV, however said that would be.

Sproul also recommends the NKJV, or he did at one time.
Jeff

Maybe that is where he got the impression that Matt. 5:9 says "sons of God" in the KJB.

I think in the English Revised Version, late 19th century, is the first use of "sons" in this verse.

Pretty amazing though that the Reformation was possible, given the widespread use of the word "children!"

Suzanne, it is a shame that this argument is taking place, and using the rhetoric that it is. As I said this morning, the ESV is not exactly consistent with it's literal langauge as some would like.

Wait a second, J.L.Watts added three more, so he's 2 out of 8. My Minnesota Math says in that case he's batting 250, still not bad, but not great either.

Who are you people? Are you straining at a gnat? Are you accusing others of doing so? The man is doing his utmost to help people walk in the way, and you bandy words about that prove nothing. Go impact somebody's life for the kingdom and quit patting yourselves on the back.

Steve, just point out an error which could mislead people and be unnecessarily divisive.
Jeff

I came across this blog while looking for a quote from this Sproul article that is relavant to the controversy taking place at Erskine College. Thanks for the images.

Ah Bible versions. I attend an Episcopal Church where most of the people think the "translators" had their own agendas and just wrote whatever they thought God should have said on a particular point. (an exaggeration, but that's the feeling I get)

I was at Biola when the Lockman Foundation produced the NASV. The care taken by the translators was amazing.

My belief is that in general, within limits, by the work of the Holy Spirit you can pick up any tanslation, paraphrase or other version of the Bible and recieve God's revelation.

The discussion here over sons vs children does point out that translators may have biases. But is there any doctrine that is directly affected by how that word is translated? Would there be if the word was translated daughters?

Your post is utter nonsense. The Textus Receptus says sons in the Greek. Isn't that what we are supposed to go back to?

It depends, which Textus Receptus are you referring to? Robert Stephanus, Elziver brothers, Theodore Beza? Or Erasmus? and if you pick one... Which of the many editions of the TR would you use? I think people her are using agenda to pick apart these translations. If you think it's so easy why don't any of you take a bunch of Hebrew, Aramaic and Greek texts found throughout the world and translate a Bible. You'll find out it's extremely hard to do without using any sort of textual criticism on Greek words. One word could mean several different things, that's why you use textual criticism for context and proper translation. We don't have original Pauline epistles to write down, we have copies that were made for preservation. As far as the Bible being "gender neutral" when the Bible says "men" depending on the context it also means women... Because woman was taken from man, so there's a unity there. On comments about RC Sproul... was he interviewed for this post? If so, where are his comments? Sproul (if anyone bothers to listen to refnet or his sermons) knows he uses the NKJV, it says the same as the KJV and the ESV and the NASB, no doctrinal errors or misleadings there. Anyone who finds "doctrinal errors" is scraping the bottom of the barrel to find them. Before and during the Reformation there were TONS of translations, editions and revisions of the Bible... Where was the controversy then? It's foolishness, and if you must know I personally read the KJV other versions as well, even though the KJ translators said there may be ways to improve their translation. But, ya know.. I think we need to reach into the history so we don't just assume things. Blessing!

All the TR versions you mention say sons.