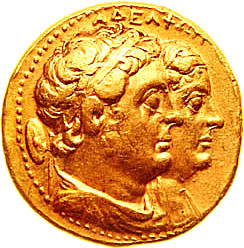 In this image, we can see clearly that Ptolemy II and Arsinöe II were called 'Siblings.' The Greek word for "siblings" is adelphoi - ΑΔΕΛΦΟΙ. This article about the incestuous marriages of the Ptolemies reads,

"On the reverse of coins dedicated to their parents as gods, they put their conjoined portraits with the added word 'siblings' (Adelphoi) -- just in case you missed the point. In fact, both king and queen took the title Philadelphos, 'Sibling-lover' -- used thereafter on documents and coins -- which deliberately highlights their incestuous union."

For some reason, there are those who claim that adelphoi means "brothers." But this is an image of a man and a woman.

Several couples in history and mythology were called Theoi Adelphoi - siblings gods - Cleopatra and Ptolemy, Zeus and Hera, Isis and Osiris, and Ptolemy II and Arsinöe II.
Posted by Suzanne McCarthy at 2:59 AM

I'm no Greek expert, but "ΠΗ" should probably be "Φ" instead.

Not to doubt a near cousin Brethren.

The “homo religiosus" of my dear Eliade now confused in the asexual Sia Indians? – the tactic of asexuality a part of the process of theological abstraction which transforms nasty down and dirty local divinities into transcendent metaphysics. I want my gods -- clean! And abstract!

Now – adelphoi – too the end of metaphysics?

Say it ain’t so. Filthy lucre.

Forget metaphysics (please). I guess I like my Vajrayana Buddhism rough and tough. Forget that too,


Since religion is where the coin-trail is! After all.


Cheers (and peace - slinking off),

Yes, it came to me this morning. I was up in the night worrying about my kids, and used an English to Greek inputter. Corrected now.

Hope your kids are ok, Suzanne.

They are fine. Just one of those worrisome things that keeps a mother up nights.