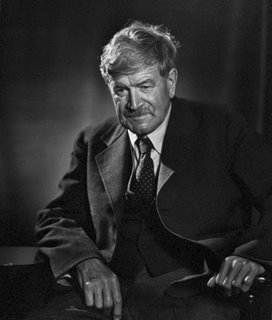 I was helping my great aunt Elizabeth Hammond with her papers one day, in 1970, and I pulled a hand-written manuscript of about 10 pages out of a large brown envelope. The title was Teaching the Unteachables. I only read a page or two of the large irregular scrawl and found the topic not to my teenage taste. I asked what it was.

My aunt explained that it was the manuscript of a talk on children with disabilities given by Stephen Leacock at a teacher's union meeting in Montreal on her invitation. It was very sad, she said. I used to see him with his wife and their child in a stroller. It was very difficult, his only child. Hmhm. And she was back in another time.

Here is a short piece from the CBC News,

After the death of Mark Twain, Leacock became the world's best-selling humourist. Part of his reputation as a funnyman was made as a platform speaker - an early twentieth-century form of stand-up. Leacock toured his storytelling and humour all over the world, often using his travel observations as material for new writing.

Behind the smiling, gentle humourist lay a driven man, burdened by the early death of his beloved wife. After her death, 51-year-old Leacock was left with a 10-year-old son to raise alone. Stevie Jr. became a constant worry for Leacock. Born with a lack of growth hormones, Stevie Jr. was small and looked years younger than his actual age. Constant worry about his son's health and an obsessive need to maintain the lifestyle he had so carefully created drove Leacock to publish - constantly recycling material for a paycheque.

When a young Yousuf Karsh arrived in 1941 to photograph Leacock for his first professional assignment, he was going to stay for just an afternoon but ended up drinking, fishing and keeping company with him for three days. His photographs (seen throughout the documentary) portray the official Leacock sparkle but they also reveal an old man tired from years of constant worry about his son and the future.

In the May 2006 edition of the Anglican Planet there is an article on Leacock as a committed Anglican and political economist written by Ron Dart. Dart has written at more length about Leacock's political thinking of which his book The Unsolved Riddle Of Social Justice is an example. View his novels here.

This was when I first began to realize that laughter is often the expression of inner sorrow; a gift that some people give to others out of their own deep need for joy.
Posted by Suzanne McCarthy at 11:05 PM