The Story of the Firebag 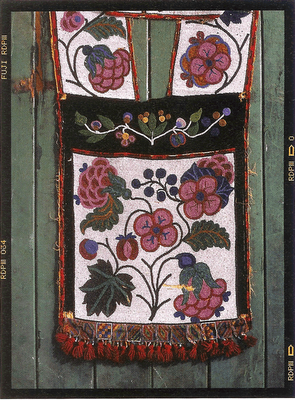 There were a couple of questions about my great-aunt Elizabeth Hammond. Let me tell the story again with a few more details.

Elizabeth was born in 1873, and was the oldest of 6 children. They were educated at McGill and Elizabeth graduated with an MA in Classics in 1899. She travelled to England on her own, taught high school and was generally considered an adventuress in her day.

In 1905, she went with her parents and a widowed friend of her father's, Wilson Erwin on a canoe and exploration trip through the rivers and lakes near the Manitoba border. There she bought this firebag, made by the wife of an Ojibway chief. It is a beautiful example of woodland beading, and took about one year to make.

Mr. Erwin was a labouring brother, a full time preacher with the Plymouth brethren. He had a large family of girls and his wife had recently died. He had intended shortly before this time to start selling life insurance to augment his income. However, he was told that he could not do this by the other brothers in the Brethren.

He then heard about an exciting new peat bog venture in Northern Ontario. (Peat Resources Ltd. represents a modern peat bog company. This is still a viable investment venture.) So he planned a trip to Northern Ontario with Elizabeth's parents and she went along.

During their time on this camping trip, Mr. Erwin and Elizabeth developed a closer relationship. How could they not! However, it became clear that her parents were not in agreement. One year later, when Elizabeth's parents were away on a family trip, they married. Elizabeth was 33 and Mr. Erwin was much older, as he had daughters that were even older than Elizabeth. Her parents cut them off.

Mr. Erwin had continued to recruit investors for the peat bog venture but it all came to nothing and he was accused of losing the investment funds of many of his Brethren supporters. I believe that it was around this time that Elizabeth started teaching at McGill. (She was a contemporary of Stephen Leacock, whom she knew, but that is another story.)

My sense is that they both worked hard to repay the money that was lost, but that ultimately it was my aunt who supported her husband in his old age. When she spoke to me of her husband it was with affection and grief over the isolation he had experienced in his last years, being cut off from fellowship with the group that he had served for so long.

There was never a hint that she felt that he had not allowed her to speak in the meeting. She could not have imagined such a practice. I am sure that he valued her for education and independent spirit and that they had a relationship full of mutual respect.

She told me this story when she was 97 and I was 15. She had a great sense of humour as well as an acerbic wit. She also knew how to laugh at herself. May we all learn from that. 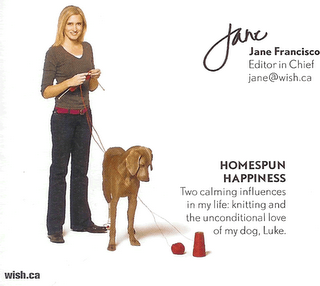 Note: The image of the firebag is taken from the Wish Magazine, where it was featured in the All Canadian March issue, 2006. page 11. My niece, Jane, is the editor of this Canadian women's magazine. Here is a picture of her on the editorial page, knitting. Some day I will write more about knitting and why it is the reigning metaphor for many women in our family.
Posted by Suzanne McCarthy at 8:17 PM