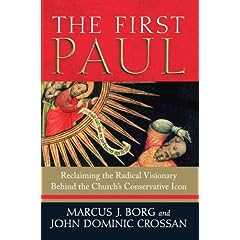 I have been reading The First Paul by Crossan and Borg. Their central thesis is that Paul's letters must be read within the paradigm of a radical Paul, a conservative Paul, and a reactionary Paul. This notion has been around in other garb for a very long time.

Almost all scholars distinguish between the authentic Paul, the disputed Paul, and the “pastoral Paul.” That is, everyone agrees that the authentic Paul wrote seven letters: Romans, 1 and 2 Corinthians, Galatians, Philippians, 1 Thessalonians, and Philemon. Some dispute whether Paul wrote Ephesians, Colossians, and 2 Thessalonians. Outside of conservative evangelical circles, few scholars attribute the pastoral epistles, 1 and 2 Timothy and Titus, to Paul.

Crossan and Borg clain that authorship makes a huge difference. The socially conservative Paul, who tells women and slaves to submit to their masters is found in the disputed letters and the reactionary Paul is found in the pastoral epistles. However, the authentic Paul, according to Crossan and Borg, regards women as equals in ministry, promotes the freedom of slaves, and proclaims a gospel that confronts the present order with a community of equals empowered by the Spirit of the risen Christ.

In my view, it does not matter what one believes about the actual authorship of the Pauline letters in order to make use of the paradigm presented above. Perhaps these different approaches represent Paul at different time periods or in different situations.

The main point is that the authors focus first on the s0-called authentic letters to establish Paul's undisputed attitude to slavery and women. There we find that Paul asks Philemon to free Onesimus, and women pray and prophesy in the assembly.

There is an excellent discussion of 1 Corinthians 7, which is an unusual document at that time, as men and women are treated as equal agents with identical rights and responsibilities. 1 Cor. 11 establishes that women did participate in public worship, while the point is made that 1 Cor. 14:33b-36 is inserted into the text later.

Three reasons are given for this. First, the passage is about prophecy and has better coherence and continuity without the disputed verses. Second, these verses appear at the end of the chapter in some early manuscripts. This is unusual and many scholars, as well as the NET bible notes, agree that this means that these verses originated in the margin. Third, these verses directly contradict 1 Cor. 11.

If this is true then one can argue that the undisputed letters of Paul do not restrict women in the assembly, and they treat the female coworkers as true equals, not distinguishing their ministry from male ministry and not placing their ministry in a separate category.

This isn't really new but I find it well written and the treatment of Philemon is excellent.

Posted by Suzanne McCarthy at 9:57 PM

Thanks for the review here!

"it does not matter what one believes about the actual authorship of the Pauline letters in order to make use of the paradigm presented above. Perhaps these different approaches represent Paul at different time periods or in different situations."

Good pauline scholars will allow him to grow, to change, to mature, to make mistakes (like most people in the biblical record do). It's scholars and readers who ossify the bible and its interpretation, who say that an author must always and only have but a single intention that cause problems for themselves and others. First, theirs is a presumptuous view. Second, their view of the one thing the writer must surely means is usually the very view they impose on others. (btw, this kind of reading was Aristotle's game. Too many still play it today when it comes to the scripture and social hierarchies presumed there).

Excellent review, Suzanne. I've added it to my wishlist.

In my view, it does not matter what one believes about the actual authorship of the Pauline letters in order to make use of the paradigm presented above. Perhaps these different approaches represent Paul at different time periods or in different situations.

Let's say that Paul did write each of the letter Traditionally associated to him - is there a way to reconcile the apparent differences?

I think so. In the first set of letters, we see early practice as it was, women speaking, everyone speaking in tongues and prophecying. It was a very charisma based church.

In the conservative Paul, we see interaction with the patriarchal cultural structures. Given that there were the three hierarchies, how would that look if you were a Christian. I believe the verse about mutual submission is the heading. But it is overall a kind of compromise, but not unrealistic or innapropriate in that day.

I believe that Luther was much more radical in some ways when he was younger also.

In the reactionary Paul, he is writing for a certain set of circumstances that we don't really know about.

I do want to add that this is just a small part of the book. There are a couple of chapters I didn't agree with but there was some other interesting material. It relates to TC's quote from McLaren.

That is, everyone agrees that the authentic Paul wrote seven letters: Romans, 1 and 2 Corinthians, Galatians, Philippians, 1 Thessalonians, and Philemon.

Just to clarify here that's not actually true. For example Wather Shmithals (student of Bultmann's) who did for 1,2 Corinthians what Bultmann did for John found that Corinthians was probably not a single letter. It shows signs of reorganization and redaction. Given that Marcion compiled, organized and spread Paul's work it is going to be very hard to separate Paul from Marcion.

Thanks for reminding me of this very interesting post. I read it right through this time. :-) It is one of those idaeas that I need to think about for a while.

I think I'll have to buy this book for Dr B who studied New Testament with John O'Neill who also held some interesting ideas about authorship of the Pauline letters
http://tinyurl.com/lrkvez