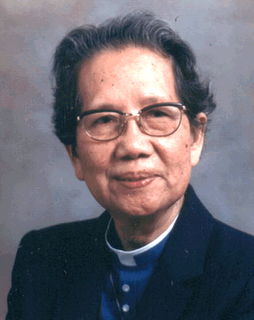 I have been enjoying a wonderful weekend with my older sister, listening to her tell the stories of women she has known. One of those women was Florence Li Tim Oi, the first woman to be ordained in the Anglican Communion.

This is an amazing story of a woman who, ordained in wartime and surrendering her priest's license in peacetime, served the church in China throughout the Communist period.

In 1984, she was reinstated in Toronto, Canada, where women had been ordained since 1976. She stands as an older sister to Canadian Anglican women.

At her birth in 1907 Li Tim-Oi's father called her “Much Beloved”. When she was baptised as a student Tim-Oi chose the name Florence from ‘The Lady of the Lamp’. Florence is celebrated world-wide for the witness to Christ that she lived out as the first female priest in the Anglican Communion. In 1931 at the ordination of a deaconess, she heard and responded to the call to ministry.

She was made Deacon in 1941, and was given charge of the Anglican congregation in the Portuguese colony of Macao, thronged with refugees from wartorn China. When a priest could no longer travel from Japanese-occupied territory to preside for her at the eucharist, the Bishop of Hong Kong asked her to meet him in Free China, where on 25 January 1944 he ordained her “a priest in the Church of God”.

To defuse controversy, in 1946 she surrendered her priest's license, but not her Holy Orders, the knowledge of which carried her through Maoist persecution. For the next 39 years, she served faithfully under very difficult circumstances, particularly after the Communists took over mainland China. In 1983, arrangements were made for her to come to Canada where she was appointed as an honorary assistant at St. John's Chinese congregation and St. Matthew's parish in Toronto.

From that date until her death in 1992, she exercised her priesthood with such faithfulness and quiet dignity that she won tremendous respect for herself and increasing support for other women seeking ordination. She was awarded Doctorates of Divinity by General Theological Seminary, New York, and Trinity College, Toronto.

The very quality of Ms. Li's ministry in China and in Canada and the grace with which she exercised her priesthood helped convince many people through the communion and beyond that the Holy Spirit was certainly working in and through women priests. Her contribution to the church far exceeded the expectations of those involved in her ordination in 1944. She died on 26 February 1992.

In 1971 in Hong Kong, my sister attended the historic ordination of Joyce Bennett and Jane Hwang, the first regularly ordained female priests in the Anglican Communion.

This is a blog written by a women who wishes to witness to the spiritual integrity of ordained women, to stand beside them and tell their stories, stories past and stories yet unwritten, about women who answer God's call to serve. In remembrance of Florence Li Tim Oi, may we all exercise our different gifts with grace.
Posted by Suzanne McCarthy at 10:32 PM

This is a blog written by a women ...

("majestic plural")? Not really. Don't forget there were two women involved in this post. I was going to say "We are women ..." and then changed the phrasing. I have many sisters, Ruud, so inevitably I must sometimes think of myself in the plural some of the time.

That is really cool, Suzanne. Wow.