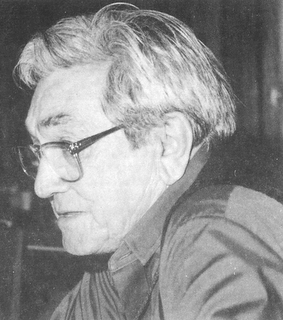 It is hard for me to believe that a person as influential as Redfern Louttit is only mentioned obliquely on the internet, once as the late Redfern Louttit and then again as a distinguished Anglican cleric.

In 1990, I was involved in a study of the use of Cree as a language and literacy in the Diocese of Moosonee in Northern Ontario. I traveled to a clergy retreat in Kirkland Lake with Redfern Louttit and we had plenty of time to talk on the road.

Fortunately I do not have to depend on my own memory to tell you one of the stories he told me that weekend. The Journey, Stories and Prayers for the Christian Year From People of the First Nations, ed. by Joyce Carlson includes this story by Redfern Louttit.

I was chosen by my family when I was nine years old to be a servant of God, a priest. When I was nine, I went in a canoe with two priests and two paddlers.

I was so far from my home that I never went home until I was eighteen. When I stepped out of the canoe, my parents looked up and said, "Who's that handsome young clergyman?" They didn't recognize me. I couldn't talk to them because they spoke no English, and I had lost my language.

At this point in the story his voice quavered as he said to me, "I couldn't even talk to my own mother - in her language, my language." He did later regain familiarity with his language and was fluent and natural in speaking, reading and writing Cree. He continued,

The teenage years were especially hard. There was a person at the school who was like a foster mother - and she was good to us. But, it wasn't the same as if you had a real father and mother to guide you through the struggles.

My parents had a bit of status in the community because they had a son who went out in this way to be a clergyman - but it was also hard. Although my parents were admired, many of the other people in the community admitted they could not have done the same themselves, to send out a child so young to go to school.

I think it was hardest on my mother. After I left, my father said it was a long time before my mother had her heart in her work. There were others at home, but they say it was very hard on her when I left.

When I was a freshman in university taking theological studies, everybody knew I was an Indian. They had certain ideas of how an Indian would be.

At initiation days in the college, [Wycliffe College, Toronto] because I was an Indian, they had me do an Indian War Dance in the streets of Toronto. They must have given this a lot of thought. They had feathers fastened to a cardboard piece and they fastened it to my head. I stomped around on Bloor Street whooping it up as I thought a war dance would be - although I never saw a war dance in my life. Where I came from, people were Bible-believing Christians. I didn't know what a war dance was!

Well, I must have looked funny.

Since I was an Indian, they thought I must know how to run so they asked me to be on the five-mile running team. I didn't know how to run! I'd never tried to run in my life - but I didn't want to disappoint them, so I said I would. Maybe there was something to it because I trained and learned how to run. Every year that I was there, we won the first prize.

I have a band number. I somehow found it hard, being a number. It was as though I didn't have a name. When I graduated and was a young clergyman, people in the communities I served thought I knew everything - even what the weather would be like the next day. For some reason they thought of someone educated as having all knowledge.

I have had a good life and many opportunities to seve the Lord for over fifty years. My time of serving is over. There are different ways to do things now and a whole new generation of young leaders. They will do things in a different way - and this is good.

In choosing new leaders, I remember the apostles and the difficulty they had in choosing leaders. We have to be careful in the choosing of leaders for our community - but I believe in the Bible and I do by the words.

"Be not afraid; only believe!"

Creator,
You are Alpah and Omega,
beginning and end.

May we be wise,
serving you with fear
taking refuge under your wings.

Lord, come,
Stand among us and show us your peace
We long to be believers; help us in our unbelief.

We give thanks for the leaders who have gone before us.
May we, living in the knowldge of or resurrection,
consider in our hearts how we might werve you.

Prayer for all people

That we may be obedient to God rather than to any human authority,
let us pray to the Lord.

I am very grateful to have known Redfern Louttit, a wise and gracious man, an ordained priest who served in the Diocese of Moosonee for 50 years.

Redfern Louttit was my beloved father. We miss him still, very much. His absence has created a very noticeable hole in my mother's house; yet his spiritual presence stll very much fills our home. There is not a day that goes by that I do not think of him; he often visits in my dreams.
Christmas is around the corner and those of us who can, will journey "home" and continue the traditions that he and my Mom created when they began their life together all those many, many years ago. Dad and Mom created a very happy, safe and secure home; a home filled with love, laughter and happiness. This Christmas, we will gather together again and relive those past Christmases when Dad was still with us. It will be a joyous and happy time!

My father was Canon Ralph T. Gibson and was in Wycliffe with Redfern Louttit. They kept in touch for many years. My sister and I remember him. Janet Gibson